Yawn. I just about 15 minutes ago finished with the shawl. You know what? I hate it. There is nothing much to say about it. I fist of all made a mesuring error (big-one) that I couldn't fix. Then the paint was actually not red. It was close to hot pink and when mixed with balck, purple. If I would've had enough energy, I had painted the stripes in the right size when compared to each other. The 100th thing that went wrong was thta the paint varies with the color. And there are alot of paint stains everywhere. So, basically EVERYTHING went soooooo wrong. I guess, it won't be noticed from a distance... I hope.

I haven't failed with so many things in one item for a very long time. Ever? A new, perfect one will be made in the future. I really, really promise. I'd hate to be a big failure. That idea makes me very sad. D;
Lähettänyt pumpkin klo 6/22/2010 02:23:00 ap. Ei kommentteja:

I'll put a couple of pics of my progress by now. *leaves downstairs to bring the camera* This is basically what I've done in four days: 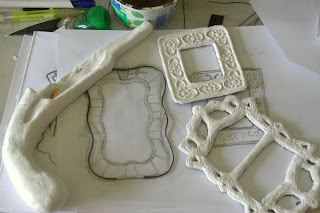 Skeleton of the flintlockpistol and some buckles. 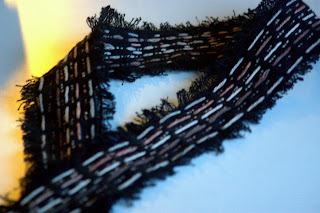 Jack's wristband.
The only thing from this stuff I can say is even nearby finished, is the wristband. I actually have to make one more with a "leatherish" touch. It's all different shape and everything but I think it wont take as much time as this one did. I hope.
The buckles are not finished yet as you may see from the picture. I have to figure out something to make at least the inner edges stronger. I know I'm kinda stupid because I used modelling clay to make them, but I was desperate! And I think I was right that Cernit wouldn't have been a much better idea either...
The least finished affect of the all is the flintlockpistol. I made the skeleton out of modelling clay too. There's alot to do. I have to sand it and make the missing pieces separate. Most of them from modelling clay but I was thinking about soft foam for some details. I have been making the sword too.... But at this moment I was too lazy and ashamed about it that I couldn't take a picture. When it's finished, I promise to put a pic or two.
I have been finding some stuff today. Stuff that has been gone around missing somewhere for a while. Fake leather, fake fur and my metalyarn stitcks. Yay!
Now, after doing nothing by this moment, I'll make my third aquamarine beltbuckle right now. I had in my plans also to make some buttons. Alot of buttons.
Pumpkin
Lähettänyt pumpkin klo 6/19/2010 03:43:00 ip. 2 kommenttia:

Ghh. I can't believe it... I'm stupid. I went to Tampere to buy some fabrics. I bought three different kinds of linens. One of them was dark blue linen for the vest. I should hate myself. I had two fabrics to choose from. The other was one euros more expensive than the other. The more expensive one was this very blue linen with a slightest gesture of violet. I thought it was way too bright coloured. It was also quite a bit stronger than the other one. The other one was alot darker and I thougt that when I put it in the sun, it would become somewhat the right colour. When I finally got to home about an hour ago, I showed the fabrics to my mom. "But that's black, you must've seen it in the yellow lighting as blue." I of course denied it. And now I'm starting to think that my mom was right. ARgh! Stupidstupidstupidstupid! I don't have any more money.......... And I can't borrow any more from my mom. She's broke. My grandparents promised me to give some support but I don't know how much it'll be. And luckily my father'll support with the boots too. There's a tention weather the costume'll be done in time or not and if I'll have enough money or not.

When I was shopping the fabrics I imagined myself as how I'd look with my costume done. I was going to buy some food from the same place I'll probably buy it in Tracon. I looked down at my toes and imagined the boots on my feet. For a moment I ripped my spirit from my body and looked my future me. I went back to my body and I imgained my group around me and Elizabeth next to me. *grin* It made me feel good. Better. I hope everything'll be alright.
Lähettänyt pumpkin klo 6/17/2010 07:22:00 ip. Ei kommentteja:

This is a musty. I sort of found one cosplayblog and one thing followed another. Perhaps I'm a blogger whore now. I'm a public stalker on a few quite amazing cosplayers' blogs.  I'm too excited to really find what the others have to say about things. How they progress with their costumes. And now I think I can rule the world (by stalking amazing cosplayers' blogs)! Naah, just kidding. But it's just... just. An honour. Hope they won't scream and runaway from me. They are some rolemodels for me. I really look forward of progressing so much that I can say to myself that I have complished a dream I had when I was 14 years old. I'm 17 now and soon 18, by the way.

I'm going to Tampere today and buy materials. Cotton for the pants, linen for the shirt and the vest. I'm already late for my schedule. I also need some modelling clay and white paint. My main incredients. What else? Aah, I was considering of using a fabric with a mixture of linen and wool... Or something. I don't know if it's even possible. That fabric would be for the shawl. I just realized that I'm still in a need of an exotic squirrel fur. I wonder how I'll be making that thing for the costume.

My plan is to make all small things this week finished. The props, charms, pearls, buttons, rings, wristbands. What else? I don't have a single idea of how to make the coins. I guess it'll be something as vulnerable again as modelling clay if someone doesn't pop out a great idea for me. A mold plus some tin would be great.... But I have a doubt that the efforts would go in waste. In the next version, I  keep saying to myself. 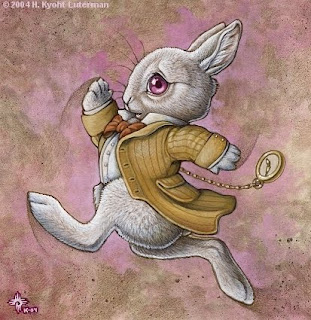 I have just figured out something. It was time, I guess. When I make my costumes... Or.. . .. Actually, well, umm. The thing that matters the most when making my costumes is time. T-I-M-E. How could I have missed something so simple coming in my mind? I mean, I have figured that out formally, but I haven't understood it really until now. When I come to think of it, all things I have done with time are pretty awsome. Like Fumika. Almost the whole costume was made with alot of time. I was almost satisfied with it. And DiZ's armor, it was great, but I didn't have time to model it to my body well enough (the other parts of the costume were.... umm. Awful?) What other examples I could tell you. Lulu's hairpieces and jewellery, I made them half a years before I started with the other parts of the costume.

After a week of working with the compass... 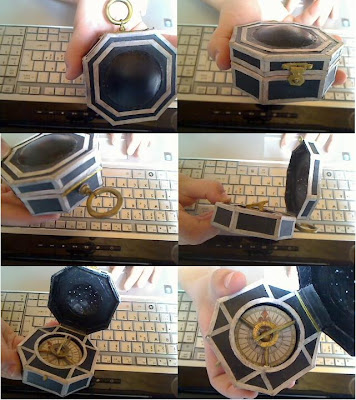 ...I finally finished it! Whoo! \o/ There is still missing the fake leather covering inside the upper part. In other ways, it's done. I like it a lot, but the one thing I'm not really proud of is the lock-thingy. I almost went crazy thinking of how to make it, so it's just paper and some metal yarn. At least it works somehow okay. As I previosly told, the plate-thingy can be twisted and turned around by this simple mechanism I made there. I planned to use magnets, but there's just a needle inside, that is attached to the plate and comes out from the bottom. I sort of shaped a nod again from the modelling clay I use alot and by turning it, the plate turns around too.

The whole thing goes with my plan B. The materials I used where simply just some cardboard, paper, modelling clay, metal yarn, acrylic colours and a needle. My favorites, I guess.

I guess some day after Tracon I'll paint it even dirtier (it is more uneven than it looks in the pictures) and cut and paint some missing pieces as there is in the P3, And make a new lock!
Lähettänyt pumpkin klo 6/14/2010 12:19:00 ip. Ei kommentteja:

I think I came back

I have been somewhere hovering under an angst cloud for too long. Yesterday it finally got to it's end. I don't feel that way anymore... I feel free to move on in my life.

My doings ended right where what I last told you about. The compass. Yeasterday, I continued with it. I cut the round shapes and glued the parts together. I even painted the whole thing, although I have to do that atleast once more. I finished 100% the needleplate, painted and drew every line and number on it. Parts the compass is still missing are the triangular thing inside it, and the plate with degree numbers from 0-360. I have to also somehow make some hinges and a lock, not to meantion the magnet thingy that makes it spin around by itself. Any idea where I could find a somewhat strong magnet?

I hate to this out loud, but I have to. I have to make a costume for my friend Zexy. And I'm most definitely not looking forward to it. I really regret of saying yes to his suggestion last February. Even back then I knew it wouldn't be possible to make two über cosplay costumes in the summer. I knew it wouldn't be possible to make the two of them well. My principal is to not betray other people if I have promised something. I shouldn't have promised anything. Now I'm really worried about my cosplay, Jack. I felt and still feel that he is pushing me alot with this costume. If he hadn't, I wouldn't have said yes. It has so much of detail, that I think I won't finish it in a week even working 14 hours a day. I would like to shout for help, but what's the use? Who can help me? No-one. I can't say no and I know, that the possibility that he's going to cancel the project himself is very, very unlikely. My nerves are cracking down all one by one.
Lähettänyt pumpkin klo 6/09/2010 10:30:00 ap. Ei kommentteja: